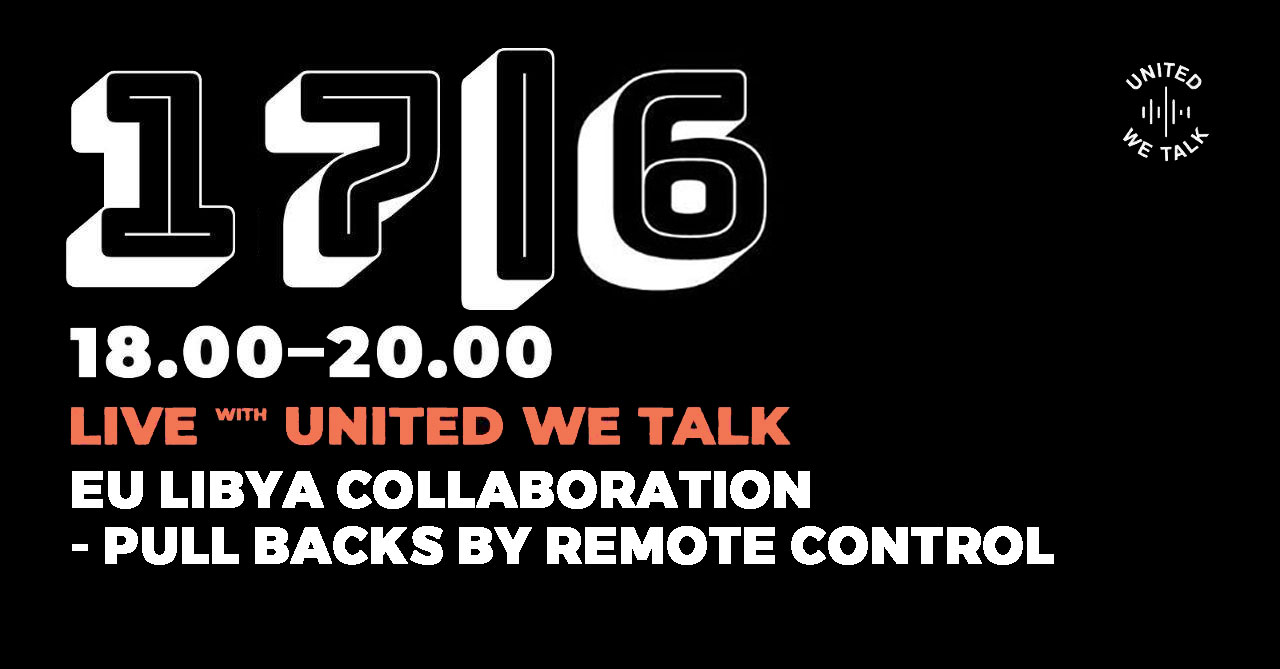 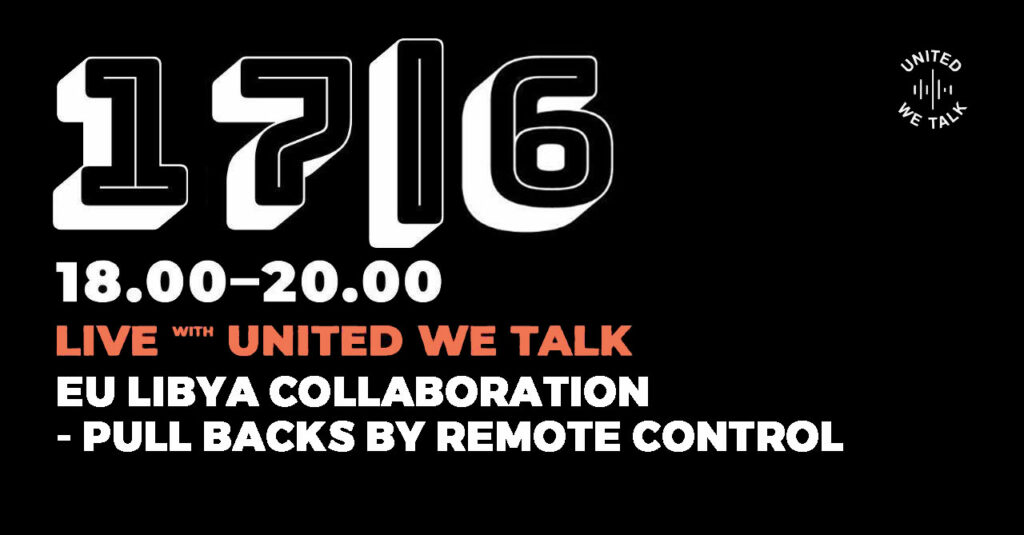 █ In today’s UnitedWeTalk session we will host the launch of the exclusive report “Remote control: the EU-Libya collaboration in mass interceptions of migrants in the Central Mediterranean” denouncing the support brought to the so-called Libyan Coast Guard by EU member states to control migration in and around the Central Mediterranean. The EU’s increasing outsourcing of responsibility for rescue has led to mass pull-backs of migrants to Libya by ‘remote control’ from EU aerial assets.

▂ During this issue of „United we Talk“ you have the possibility to chat with us via the website: https://sea-watch.org/unitedwetalk/ There you can also watch the stream of ALEX TV and ask us questions that we will take into the live-talk of the show.

▂ Based on their first-hand observations, activists from the emergency hotline Alarm Phone and the Search and Rescue NGOs Mediterranea and Sea-Watch, together with borderline-europe, will report on how the aerial collaboration between the EU and Libya works operationally and how it contributes to the mass interception of fleeing migrants.

▂ Considering the ongoing civil war and countless reports of torture, rape and further degrading treatment taking place in detention centers, it is clear that Libya cannot be considered a safe country for people on the move. Together with our guest speakers, Sally Hayden (journalist) and Yasha Maccanico (Statewatch), we will also touch upon recent developments in the Libyan camps as well as discuss the accountability of European actors.

█ The Logbuch Freiheit #009 is about mass mobile phone data analysis of fugitives in Germany during Covid_19. Lea Beckmann from Gesellschaft für Freiheitsrechte e.V. – GFF http://freiheitsrechte.org/ and Linus Neumann from http://logbuch-netzpolitik.de/ are in the program.

█ Coview-TV pres.: Coview-NEWS: The show with the cat. The scratchy transnational news about #Covid_19 … provide activist stories, trends and news about the current crisis from now on regularly / irregularly from: www.coview.info join the chat during the show. You have material for the news or want to participate in any other way – mail to: [email protected]

█ And at the end of the show we give a short outlook on 01.07. – This show will be about „transnational networking beyond crisis“. We give you an insight into what you can expect and how you can participate. In order to make „a good life for all“ reality!

▂ Sara Bellezza (borderline-europe)
is a member of borderline-europe and a doctoral researcher in social- and cultural anthropology at Free University Berlin. She researches and publishes on the criminalization of migration and flight aid and focuses on documenting and reporting about the situation of the EU’s external borders and externalization politics.
https://www.borderline-europe.de/

▂ Matthias Monroy (Editor CILIP)
is focusing on policing in the European Union and new technologies for surveillance. Works part-time for a member of the Left Party in the German Bundestag, questioning the government on Frontex, EU military missions, migration control in the Mediterranean Sea. He publishes in left-wing newspapers, online-media and netzpolitik.org.
https://www.cilip.de/

▂ Lucia Gennari (Mediterranea Saving Humans)
works on immigration and asylum law as a lawyer in Rome and is part of Mediterranea. In recent years she has participated in the study and development of strategic litigation on EU policies of border externalisation and on legal issues related to SAR operations and the protection of human rights at sea together with associations and NGOs.
https://mediterranearescue.org/

▂ Kiri Santer (Alarm Phone)
is a member of Watch the Med – Alarm Phone and a doctoral researcher in legal and political Anthropology at the University of Bern, Switzerland. Her research examines recent transformations of the governance of migration in the Central Mediterranean and the EU’s project of border externalisation there and in Libya.
https://alarmphone.org/

▂ Bérénice Gaudin (Sea-Watch)
is the Advocacy Officer and legal advisor in charge of the strategic litigation, merchant shipping and Airborne matters and has personally participated in Airborne missions for the NGO. She graduated with the highest honours in French and German law. Her specialties include human rights, law of the sea and migration.

▂ Yasha Maccanico (Statewatch)
completed a PhD in Policy Studies at the University of Bristol on „Immigration policies as a problem: state power and authoritarianism“. As a journalist and researcher, he has studied EU justice and internal affairs, and their effects in member states for Statewatch since 1998.
http://www.statewatch.org/

▂ Sally Hayden (journalist)
is an award-winning journalist and photographer currently focused on migration, conflict and humanitarian crises. Sally has reported from many countries around the globe including Syria, Sudan, Nigeria, Iraq and Rwanda. Sally has a law degree from University College Dublin and has worked as a trainer at the BBC Academy, a visiting lecturer at London College of Communication and New York University, and volunteered as a mentor for the Refugee Journalism Project.
https://sallyhayden.net/